A second day in Rome is absolutely necessary for any traveler.  I’m not sure if even two days give Rome the justice it deserves, but that’s all we had, so we made due.  As I stated in the previous post we chose to stay in Rome for the night since our cruise ship was docked at Porto Di Civitavecchia, about an hour and fifteen minute drive from Rome.  This proved to be an inspired decision because it gave us an early start to our second day in the city.  Our guide, Fabio, yes we were lucky to get him a second day, met us in our hotel lobby at 8:30am and we were off.

We took a taxi that fit nine (big mistake it ended up costing us twice what two taxis would have been) over to the Roman Colosseum, also known as the Flavian Amphitheater.  When we arrived, there were very few other tourists and we had a nice leisurely tour around the ruins.  Since we did not book our tour through the Pierreci, tour company, we were unable to go down to the underground passageways, but with our group of hooligans we were okay with that.  We knew our group could only handle so much information and since a stray cat roaming the grounds was more interesting to them than what our guide was saying we knew we had made the right choice.

The Colosseum is just as amazing as I’d always anticipated.  I was not let down, unlike the Leaning Tower of Pisa which I anticipated being a little taller.  It is a huge tight circle used for a very disturbing form of entertainment.  However it lived up to what I’d imagined from Hollywood movies, and I loved hearing the stories Fabio told us, and getting to see it in person.  Again our tour guide Fabio was excellent with his knowledge of the area and we got him through www.imagineartistours.com, just incase you haven’t read the previous blog post about Rome.

From the Colosseum it is a nice walk down to many ruins close by.  We saw the Arch of Constantine, St. Peter-in-Chains church, The Arch of Titus, Palatine Hill, The Roman Forum, and even where Julius Ceasar was cremated. (People still come an bring flowers to put at this site in memory of Julius.)  It was all so close that we either walked by it, or had a great view from one of the other sites to see it all.  The kids enjoyed the stories of Brutus and Cassius, Julius Ceasar, Ceasar Augustus and everything to do with the killings at the Colosseum (should I be worried?).  However this is when we started to noticed the crowds that began to gather in the area.

There were lines forming everywhere and we were grateful we had gotten there early!  We were half way through our tour when we noticed how crowded it had become.  A tip for visiting the The Roman Forum is that there are two lines to buy tickets.  We had a combo ticket so we didn’t need to buy any but we walked by the long line to get tickets and noticed that further in there is another ticket booth that was virtually empty and the ticket salesperson was not going out to usher people to her booth.  Also as we walked into the Forum there was no one there to take our ticket, our guide just held it above his head and walked right in.

Inside the Forum was where Julius Ceasar was cremated, old ruins of businesses, and political buildings are left in the area.  My kids got the biggest kick out of the fresh spring drinking water that comes up out of a pipe in the ground.  After asking Fabio if it was okay to sample it, they all had to have a sip and claimed it to be the best water they have ever partaken.  I of course knew it was due to the fact that we had been walking for about two hours with no breaks for a drink so this was a nice break.  I truly think they will remember Roman water being the best in the world.

From the Forum we kept walking uphill toward the Capitol Hill.  We saw the Victor Emmanuel Monument, and took more pictures.  This statue is said to be able to fit thirty people inside, it is that grand.   It was amazing to see so many of the statues up close in this area and get a grasp of how large they really are.  I made Bailey get close so I could better display their magnitude in size.  It was amazing.  Here our tour ended in the Piazza Venezia, where there is a big white columned building that has Italy’s Tomb of the Unknown Solider, and the Risorgiemento  Museum which is free.  Just the front stairs of this building it is great to catch a glimpse down the road toward the home of Mussolini.

It had been a long morning for the kids and they were ready for a real break that included food, so we once again said goodbye to Fabio and headed off to eat.  After lunch, and a short rest at the hotel to unload unneeded coats we set off to say our goodbyes to the Trevi Fountain.  I think the kids liked this spot so much because of all the gelato and crepe shops in the area.  We had our gelato, made more wishes in the fountain, and began our hike back to the hotel to meet our transport back to the ship.  We did a little shopping along the way and somewhere Bella touched something that caused her to break out in a rash and that made me grateful that I packed new medicines for anything that could ail the kids while we were abroad.  A little Benadryl seemed to help and with the help of that, and all the walking she was fast asleep that night.

On our drive out of Rome we were able to see the Baths of Diocletian which were built in 300 A.D. and meant to hold up to 3,000 bathers, and the Church of San Giovanni in Laterano.  This church was built by Constantine, the first Christian emperor and it houses the Holy Stairs.  Though I didn’t get to see the stairs it is said that Christ walked these stairs and today many Catholic pilgrims ascend these stairs on their knees.

It was a very quick trip to Rome which wasn’t enough for me to get a real feel for the culture.  I would have liked to spend more time shopping and eating in the city and talking to more of the taxi drivers.  However so many of the drivers don’t speak English and that made it very difficult to do more than point to a location on a map of where we wanted to go.  Also though our hotel was amazing and the people were all very friendly in every establishment we ate, I don’t think the country is focused on service like Spain was during our stay.  I also know that being with so many children we are quite an attraction and that caused many locals to look at us with a blank stare of silence so I was never sure if they were in awe or disgusted with our little tribe.

I do hope that my next visit I can see the catacombs, and crypts, make it over to the Jewish Ghetto, and see some of the less popular sites with hopefully smaller crowds.  It was a very busy two days in Rome.  If I was to do it again for the first time I’d plan for four days and take along Rick Steve’s book Italy, www.ricksteves.com, or Rome and do a little more touring on my own without a guide.  Guides are great for groups, and quick trips but they are a little costly, and scheduled.  However, I am grateful we had Fabio for our two quick days in Rome! 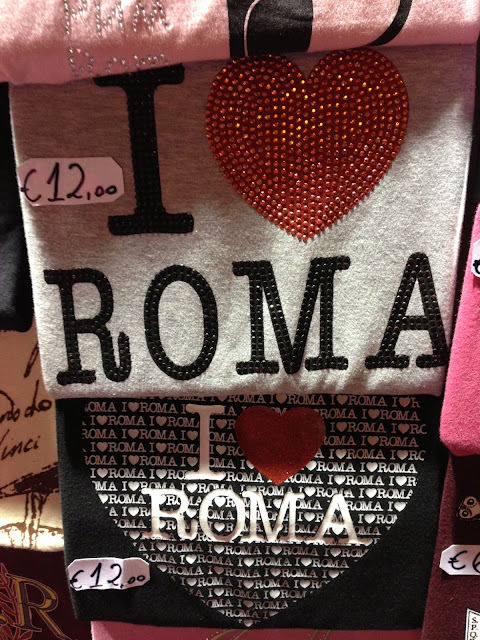