Kids in New York at Christmas is one of my favorite combinations.  The Empire State Building, Rockefeller Plaza, FAO Shwarz, Central Park, and the zoo there is so much to offer.  If the winter isn’t overwhelmingly cold it can be a playground for the entire family.

As I have mentioned in my adults post about NYC, no trip is complete without a visit to a Broadway play.  While we were there with the kids we did just that.  We took them to see Spiderman, and Lion King.  At the time they were the best shows for kids.  Though I wasn’t overly impressed by Spiderman it was my four-year-olds favorite.  At the end of the show the villain and Spidey fly over the audience and have a huge fight sequence which is pretty amazing and the best part of the show.  Since we had pretty good seats I can promise that it felt like some of the villains sweat dripped on me while he flew above my head.  I can see how it made a lasting impact on Bella.

Lion King is another great show for kids.  Though I had taken Colton and Bailey to see it in LA about eight years ago I was glad to see it again.  There is just something magical about seeing it on Broadway.  We bought our tickets for these shows on ticketmaster.com.  My recommendation is that if you aren’t in Manhattan seeing shows very often, then splurge a little and get good seats.  It can have a huge impact on whether you really liked the show or if it was just okay.

Out of all the shows playing in NY however, the very best at this time of year is starring the Rockettes called Radio City Christmas Spectacular, http://www.nyc.com.  I had taken my kids to see it back during our visit in 2006 and loved it.  It was great to know it was even better the second time around.  There is a Christmas spirit that is hard to describe watching such a fantastic performance.  I had no idea the Rockettes were so amazing!  The choreography, an appearance from Santa all the way to a live nativity at the end.  I loved how it encompassed everything I love about this time of year.  So if I could only afford to see one show at the holidays it is for sure the Rockettes!!

Another fun place to visit is Dylan’s Candy bar, www.dylanscandybar.com There is sometimes a temporary one open near Bryant Park during the holidays but it isn’t nearly as impressive as the original.  Plus the original is by Serendipity III which is always worth a visit for the frozen hot chocolate, www.serendipity3.com

My kids loved visiting the American Museum of Natural History, www.amnh.org, which is featured in the movie  Night at the Museum.  They wanted to see all of the characters that were made famous from the movie.  From Dum Dum, the Easter island statue, to the statue of Teddy Roosevelt out front, they wanted to see it all.  I love that movies can make my kids want to learn more.  We went through every nook and cranny of the museum while we were there, and even topped the day off with a visit to LeVains Bakery, www.levainbakery.com that is only about three or four blocks away.

Of course Central Park is one of my personal favorites.  We had to visit the Central Park Zoo, www.centralparkzoo.com and see their quaint exhibit, and of course see where the animals of Madagascar once lived.  From there we continued our walk through the park and watched street performers that entertained the kids for almost an hour as Trent and I took a well deserved rest on a park bench.  The younger kids were drawn into the puppet show and couldn’t get enough even though it started to rain and we had to take shelter underneath a near by bridge.

There is just something about being in Central Park at Christmas that makes everything seem right in the world.  Watching the leaves fall, and the ice skaters on the ice, there seems to be an adventure around every corner, www.centralpark.com.

Of course if I was to ever afford a stay at the nearby Plaza Hotel, which is where Macaulay Culkin’s character stays during Home Alone, that would have been my pick, www.theplazany.com.  It is a fabulous hotel with amenities I don’t have room to write down, and its accessibility to Central park would make it my pick for the ultimate stay in NYC.

My kids would say it isn’t the accessibility to the park that would make the Plaza their choice it would be the accessibility to FAO Schwarz, www.fao.com, or Build-a-Bear, www.buildabear.com or even the NBA store, www.nba.com/nycstore/ that would make it their choice as well.  All the stores on Fifth Avenue, www.visit5thavenue.com, are worth a browse but of course after Tom Hanks famous movie, Big, who could forget the oversized piano they have a FAO Schwarz.  Of course at this time of year it is packed but there’s also something about crowds that equal Christmas spirit to me as well.

The display of legos, the baby hospital with “real” nurses that wanted us to adopt a baby, dolls, trucks, dinosaurs, every toy collection we could think of, made FAO a big draw for our kids.  The almost life sized stuffed animals, the toy demonstrations that go on around the store make this a fun for the whole family activity that doesn’t have to cost a thing.  I will admit we had given our kids a few gift cards so they could enjoy buying a gift here or there at the toy stores we visited during our trip, but FAO ended up being completely free for us.

Let me explain….at one point the kids were doing great.  They were enjoying the demonstrations, getting their pictures taken with the life sized lego displays, and then we had a melt down.  We told the kids we were just going to buy one family gift, either a game we could play together, or a lego set we could build together, maybe even a craft, and since three of the middle kids couldn’t decide we walked right out of the store, and goodbye to anything we could have purchased.  I felt like it was well worth our time because we had been entertained and it was all free in the end!

Our last big splurge for the kids was to see the Statue of Liberty.  Since we hadn’t made it out to the island we decided to take a helicopter tour of the bay and up the river to see the city.  We went to Liberty Helicopter Tours, www.libertyhelicopter.com, and waited our hour and a half to get on board our helicopter.  With a six o’clock departure time we knew it was going to be a night flight, which was kinda cool at Christmas time to see all the lights of the city.  It however, didn’t give my kids the best view of Lady Liberty because even though she is lit up, because of FAA restrictions we could only go so close.  So I’m not sure if my littlest kids have any idea how big she really is.  They didn’t have much to compare her to, so it was hard to get a perspective of her grandeur.

The city looked amazing.  The lights were up and though we did have to take two helicopters to get all eight of us into the air we all had a great tour of the city.  Plus I should mention that the staff at Liberty Helicopters is very professional and very safety oriented.  There was never a chance to be put in any danger because of the specific precautions they take, especially with the little ones.

The entire week went by in a flash.  We walked, rode the subway, and traveled in cabs a few times.  The kids loved it all, though cabs were their favorite.  Subways are fun too, but as they pointed out, we had to walk to a subway station where as the cab picks us up at the front door.  Even little Bella’s four-year-old legs kept up as we trounced all over Mahanttan.  We went to the Top of the Rock,  http://www.topoftherocknyc.com, to get the best view of the Empire State building and everyone ohhhed and ahhhhed over the urban jungle we could finally behold in a birds eye perspective. 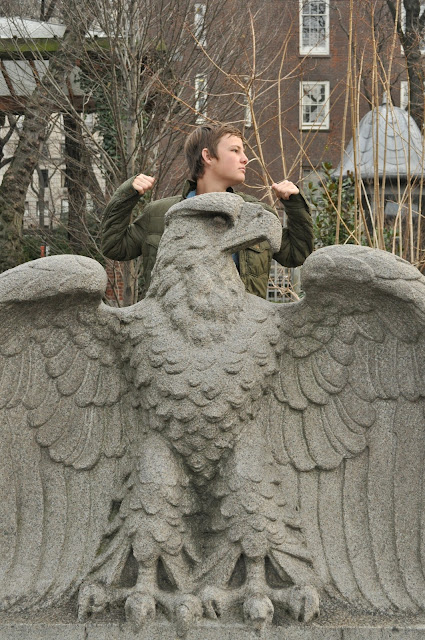 I will always have a special place in my heart for NYC especially during the holidays.  The city does a great job with the decor and it has a fun spirit of Christmas.  I love the team work it requires our family to navigate this urban jungle and I think it will be a family favorite for a long time.  So if you are headed to NY anytime soon just read the few posts I’ve made and pencil down an itinerary.  There is sure to be many other great places to visit or restaurants to experience and if you find something please please please let me know.  I would love to add it to my next trip itinerary!
Safe and Happy Travels!!