Home Atlantis The Allure of the Seas; Cruising the Caribbean

I’ve been on loads of cruises.  Initially Trent and I loathed the idea of a cruise.  We don’t drink, we don’t gamble what other purpose was there to get on a boat and go to the middle of an ocean?  I wanted to see the world, not large bodies of water.  That soon changed.  We experienced our first cruise with a group that Trent belonged to, through a university with which he volunteers.  We signed up for the cruise reluctantly with sixty other volunteers.  Our first cruise was in February 2005 and we had such a great time we’ve been cruising ever since.

What sold us on cruises?  Well here are a few things we enjoy.  We love to travel with friends.  Cruises are great because it takes away that awkward moment of who is renting the car, what restaurant does everyone want to eat at, and how to split up the bills.  Cruises eliminate all of these unknowns.  Everyone boards the ship, gets their own rooms, the meals are already paid for (for the most part, optional dining experiences are available for an up cost). There are days at sea to spend with these friends, but if everyone gets tired of each other… day excursions away from one another are another great alternative.  Traveling on a cruise with kids is ideal, because depending on the size of the cruise ship, there are kids clubs and babysitting services available, luggage doesn’t have to be packed and transported from one city to another, and everyone gets tucked back into the same bed at night.  Remember schedule and routine are important even when traveling to keep those little ones manageable. 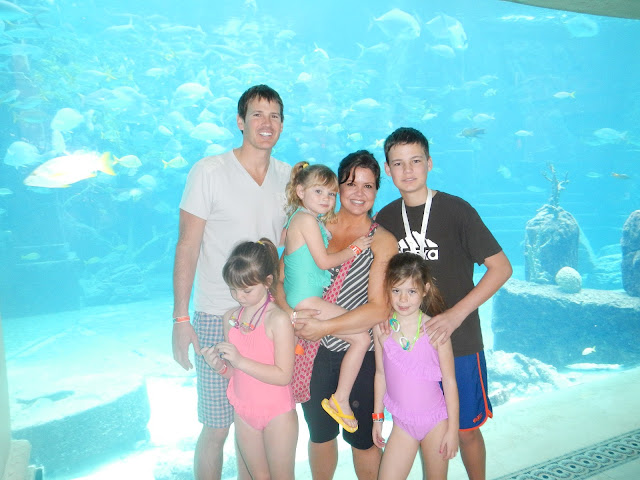 This past February, 2012, we decide to do something we had never done before…. take our kids on one of these trips with our friends from our volunteer organization.  Since we were already planning our Around the World trip for the following month with Bailey and Clay we took this opportunity to take our other four children, Colton, Lexi, Leah and Bella on this cruise around the Caribbean.

One thing that really attracted us to this ship was the mere size of it.  It was a new Royal Caribbean ship called the Allure of the Seas, part of the Royal Caribbean’s Oasis class.  It is an adventure boat like no other and is one of the largest on the sea today.  It had the Broadway musical Chicago playing in the main theatre, the Shrek characters, and Po the panda from the Kung-Fu Panda movie entertaining the kids. These characters throw parades and shows.  It is a mega Dream-works experience.  Along with these attractions it boasted two mega rock walls for climbing, at least three kid and adult pools, a childcare and kids club like I’ve never seen before, and an amazing acrobatic water show in their Aqua Theatre that rivals that of any Cirque D’Soile show in Vegas.  I haven’t even had a chance to mention the New York Central park area of the ship, the boardwalk with a carousel, and all the extra food shops and restaurants on board.  It really is a great cruise ship for children and adults alike. royalcaribbean.com

I can’t say enough about this amazing ship and all of its amenities.  Our cruise had four ports of call for the seven days we were on board.  We visited the island of St. Thomas, St. Maarten, Grand Cayman, and the Bahamas.  Unfortunately, I had already visited each of these ports previous to this trip, I say unfortunately because I love seeing new places.  However, the up side was that I had a chance to plan different activities that I hadn’t done while visiting these islands before.

While in St. Thomas, Trent and I had a chance to put our PADI cards to use and we left the boat to go scuba diving.  We opted on leaving our kids on board the boat for the day in the kids club only because we had just taken our kids to St. Thomas for Thanksgiving two and a half months previous.  Our kids were glad to stay in the kids club to participate in all kinds of fun, kid friendly activities, like science experiments, dancing, karaoke, games, face-painting, and children’s theatre.  There were so many other activities they did in the children’s center that our three girls often complained if we picked them up too early, or didn’t get them to the center the minute it opened.  I will assure you that this isn’t always the case when it comes to cruise ships kids clubs.  I have had to bribe my kids to go in the past and so their excitement for this kids club was welcomed.  Colton also stayed on board and participated in the teens club and had friends to hang out with, and lounge by the pool in no time at all.

A good friend of ours set up our scuba dive in St Thomas through Blue Island Divers, www.blueislanddivers.com .  They were very good but after our first dive I experienced a sickness like I’d never had after a dive and so I began throwing up on board the ship.  It was a humiliating experience and left me on board with only the captain during the second dive.  It was a huge disappointment for me.

While in St. Maarten we did something that Trent and I have loved to do on little islands like this.  We got off the boat with our kids, and went over to the city center, and hired a cab driver for the day.  We offered $100 for the day for him to take us around the island and give us a tour.  When we asked for him to take us to a “kid friendly” beach he quickly drove us over to the French side of the island and to a small little beach, which I think was called Baie du Cul-de-Saq.  This is a great way to avoid the over-crowded beaches that the cruise ships create near the port.  Our driver was a great local of the area and knew exactly where to take us.  I want to say he took us up to a beach north of Orient Bay but I know it wasn’t Orient bay itself since I knew other cruisers were headed to this spot.

This in fact was a great place to set up camp for the day.  We did see other cruisers including an acquaintance I had made on the boat who happens to be a consumer products reporter for the NBC Today show.  My youngest Bella and her son “J” had become friends in the kids club and they were delighted to find each other off the ship, at the beach.  This little strip of beach had umbrellas and chairs for rent, a long shelf of sand for the kids to play on, and a few weak waves.  It was perfect for me in which I wanted a relaxing beach day, and not one where I’d be counting heads the entire visit.  When I talked to this NBC reporter I found she and her family had done exactly what we did and just went to the city center and asked a taxi driver to take them to the most kid friendly beach on the island.  This confirmed to me that we had made a good choice.  Looking around there were a few other cruisers at our beach but very few compared to the beaches closer to the port.

Since we had also spent a week in Grand Cayman just 18 months before this second visit we also decided to do a beach day when we arrived there.  This time we followed the crowds to the closest beach and walked the shoreline with the kids.  We went onto the Marriott property where we knew they wouldn’t accommodate cruisers (since we’d been there before, and had seen cruisers kicked off their beach) but we knew if we ordered drinks up at the pool we could easily stay on property and enjoy their beach front (since we had witnessed this during our previous visit as well.)

Our last port was by far my kids most favorite adventure.  We took them all over to Atlantis on the island of Bahamas in Nassau, www.atlantis.com.  The kids couldn’t get enough.  Of course the cruisers all know that this is the place to visit while in Nassau so the buses line up to drive everyone over to the resort when you get off ship.  Atlantis is like a mega water park but with a little more beauty than the ones at home.  The slides are hidden in big Aztec looking buildings and creates a feeling of being in an ancient Aztec city.  Of course with cabana drinks, and lounge chairs lined up as far as the eye can see it has better amenities than the ruins.

We quickly parked ourselves on some chairs and let the kids run from one exciting attraction to another.  The best ride that I went on that day was a water slide that is a plexiglass tube that took me through the aquarium and a shark tank.  It was pretty cool to be riding through an aquarium and looking at all the sea life.  The aquariums in Atlantis, are the best I have ever seen in the world.  They have stingrays that are up to fifteen feet wide, and I don’t think I would have believed that they were real had I not seen them with my own eyes.

Some of our friends who didn’t have their children with them, and weren’t as interested in the water rides, did behind the scenes passes.  This gave them opportunities to feed the fishes, see how the fish are cared for, and the fish hatcheries, the water filtration process, and so much more.  They couldn’t stop telling us what a cool experience it was to see how the aquariums were maintained and how the sea life was all cared for behind the scenes.

Though I can’t say this is the very best cruise ship for kids, because I have yet to go on a Disney cruise ship– I will say that I can’t imagine it being any better.  Our kids loved it and often fell asleep at night exhausted from a fun filled day.  To see their little painted faces while they were dead asleep always brought a smile to my face.  It will be hard to convince these guys that a cruise isn’t the only way to travel.  For now they can’t wait for their next cruising adventure.

As always… Safe and Happy Travels!!