Home beach Sri Lanka Anyone? Around the World 6

Our one and only day in Sri Lanka, we decided to make a beach day.  Our day at port was cut short because we had to get to Mumbai earlier than expected so we only had from 8:00am-12:30pm to enjoy the country.  When we got off the boat in Sri Lanka we walked out of the big shipping dock and found a taxi driver to take us to the beach.  The driver we found charged us $60 US dollars to drive us in a military style open air van to Mount Lavinia Beach about 12 kilometers from our dock.  Since the traffic is so bad in Sri Lanka and there is no real freeway system it took us about 45 minutes to get to the beach.

Once at the beach we found six beach chairs with umbrellas that we were able to rent for $1.80 each about 200 Sri Lankan rupees.  We got ourselves settled and headed out to the waves.  The ocean was beautiful and had great waves for body surfing.  Our friend “J” was the best I’ve ever seen riding the waves all the way in like a true pro surfer.

We saw some Sri Lankan fisherman a little ways to the right and to the left of us pulling on some large rope but we didn’t know what they were doing.  Then we realized they were pulling in a large fishing net and we had been swimming in the middle of their catch!  Clay and Trent soon grabbed hold to help the fisherman and we had a great seat to see what the nets brought in. 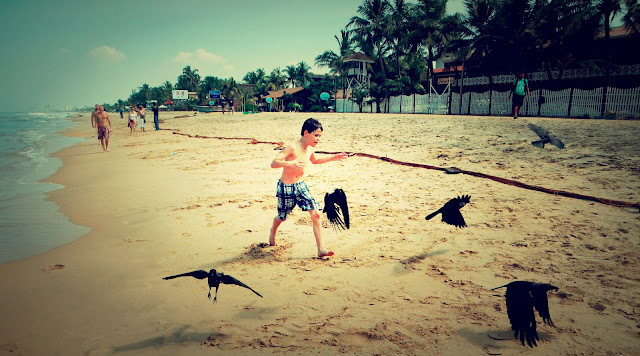 Our friends “C” and “D” had some local meal of curried rice and chicken and we sat at our lounge chairs drinking our .50 cent bottled diet cokes and Fantas, while we watched the fisherman and the show going on in front of us.  It was exciting to see and we felt lucky to be apart of it.  Plus the waves were great and it was really a very nice beach in this part of the world.  We only saw a few pieces of trash but that wasn’t until after the large net was pulled in and so I think it was trash that had been pulled in by the net.

The fishing turned out to have a disappointing bounty with only about 2,000 very small fish about the size of a finger.  There was one baby shark in the net and the fishermen were excited about that since they could sell it to an aquarium store and make a little profit.

In the end we spent about three hours at the beach.  We shared some great company with some of the local surfers and peddlers selling their shells and sharks teeth.  We felt the sand of Sri Lanka and swam in the Indian Ocean.  It was a different experience and though the surf instructor that was trying to sell me a lesson had dark skin, and an Indian accent, and bobbed his head in a circular motion, he still had beautiful wavy black hair tied low behind his head and his beaded necklace tight on his neck.  He wore a fitted surf t-shirt and ill fitting board shorts that made me think he could easily fit in with the crowd in So Cal. 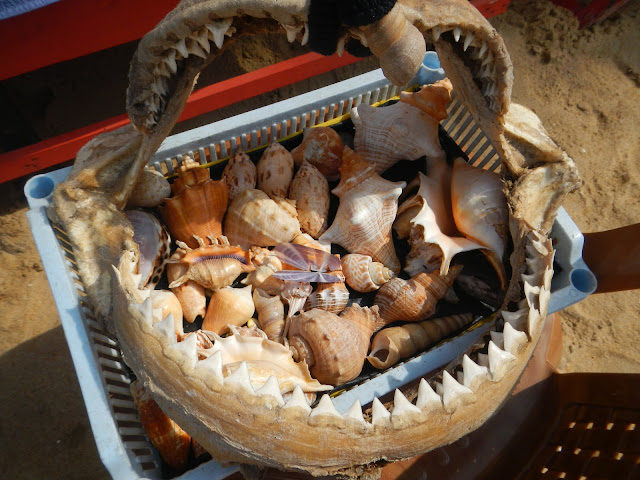 When we left the beach we said our farewells and headed back to our military style van and rode the forty-five minute ride back to the ship.  We had our driver stop for ice cream and cokes at the gas station and we got lots of smiles from these great people piled in busses, taxis, rickshaws, and mopeds that couldn’t stop staring at these white Americans. We didn’t mind because most of them had great big smiles on their faces.  So we waved and smiled back but I refused to blow kisses though my friends “J” and “D” kept trying to get me to!